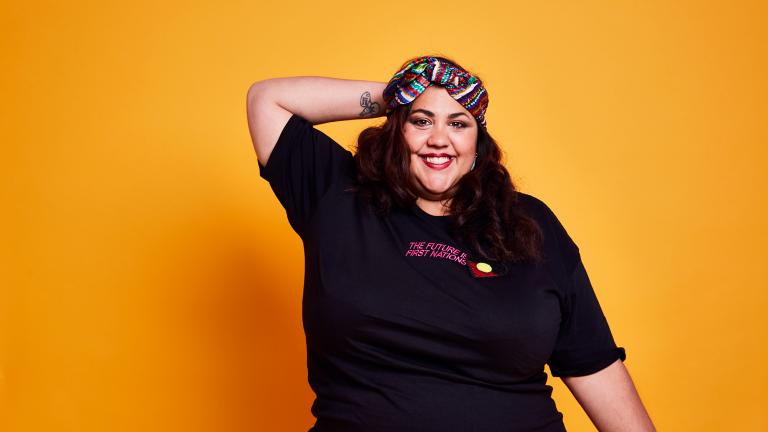 One of the brightest stars to explode on the Australian comedy scene in recent years, Ydinji comedian Steph Tisdell is bringing the brightest up-and-coming First Nations comedians to the Wonderland Spiegeltent for her award-winning stand-up comedy show Black Out.

With warmth and wit winning her rave reviews the world over, Steph Tisdell’s Black Out is a must-see.

Steph Tisdell
Steph Tisdell (Melbourne International Comedy Festival Gala, The Project) is a proud Aboriginal woman and is making a fast rise as one of Australia’s funniest comedians, putting her in the unique position to encourage other Aboriginal artists to come forward and showcase why they’re the funniest race in the world, and that’s what inspired her to put on this show.

Leon Filewood
Leon Filewood is an engaging presence on stage, with the ability to spin a yarn and tell a story unrivalled by many. Originally from Thursday Island, with a law degree under his belt and a strong passion to see change for his people, Leon is one to watch. He won the Melbourne International Comedy Festival “Deadly Funny” competition in 2018, his comedy is sharp, clever and bitingly political and always has a message, while still remaining light and entertaining.

Ky Ambrum
Ky Ambrum was born in Innisfall and grew up in Bundaberg, his comedy style and personality is 100% far North Queensland and has seen him perform in two “Deadly Funny” Grand Finals in 2018 and 2019. Ky is one of the rising stars of the Australian comedy scene and is only going from strength to strength.